A Laois musician, Robert Harvey is one of the best exponents of flute, tin whistle, whistling and lilting in the country.  Combining a first-class academic background, wide-ranging teaching experience as well as being a fine live performer, Robert and his brother James are two of the most musical brothers you are likely to find.

This is Robert’s debut solo album, and it showcases a variety of tunes sourced from collections made by O’Neill, Goodman, Fleischmann, Joyce, Petrie and Kerr, in addition to more recent compositions,

The title track ‘Feochán’, is named after a beautiful Tommy Peoples slow air of the same name – The Gentle Breeze.  Robert is joined on the album by other first class musicians such as Eilís Lavelle on harp, Conal O’Kane on guitar, Tadhg Ó’Meachair on piano/harmonium and Ciarán Maguire on bodhrán.

Favourite track for this review is the title track – No 7. An Feochán (Air) 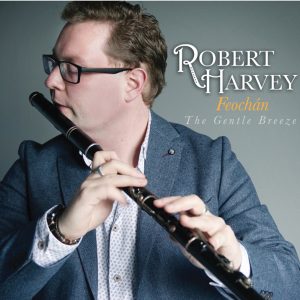