Kíla are an Irish folk music/world music group, originally formed in 1987 in the Irish language secondary school Coláiste Eoin in County Dublin.  The band’s first performance was upstairs in the Baggott Inn, Dublin, and was attended by three people.  They have moved on considerably since then, with 10 studio albums, 3 live albums, as well as a number of sound track albums.

In late 2011, Kíla published their long-awaited Book of Tunes. Comprising over 100 of their compositions and lavishly decorated with photos, poems & prose, the book was a huge success, being described as ‘a masterpiece’ by Seán Laffey from Irish Music Magazine.  This book is worth getting in its own right as a present – if you can track one down.

This writer’s favourite track is No 1 – Handel’s Fantasy, the title track. 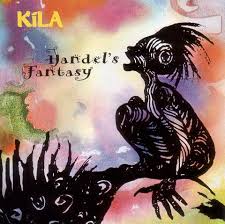