John Carty – I will if I can – Album Review

For banjo players, John Carty is a strong influence and inspiration.  Considered by many as one of Ireland’s best traditional musicians, Carty plays fiddle, tenor banjo, tenor guitar and occasionally the flute.  He is very interested in the North Connacht traditional music style.

Carty was born in London and now lives in Boyle, County Roscommon.

His first fiddle album, Last Night’s Fun, which released on Shanachie Records in 1996 has been described as a milestone in recorded fiddle music.  In 2003 he was awarded Traditiona 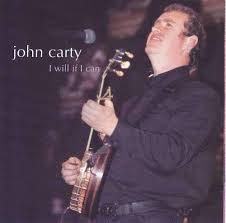 l Musician of the Year by the Irish Television station TG4. The award placed him in the company of previous winners, such as Matt Molloy and Paddy Keenan.

This album was released in 2005, and one of this writer’s favourite tracks is No 3 – Queen of the West / City of Savannah (hornpipes).